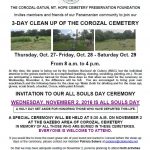 A new association has been formed for the care of the historic cemeteries here in Panama. “The Corozal – Mount Hope Cemetery Preservation Foundation”  Judith Stewart and Rev Richard Williams join me to talk about some of the history, about the formation of the foundation and the upcoming three days of cleaning of the Corozal cemetery, 27th-28th and 29th of October.

In the last hour “things that you though were healthy but are not” that is Yoly’s topic for this morning!

The Juan Carlos Varela government will not make the decisions about what will happen to the Disability, Old Age and Death (IVM) program of the Social Security Fund (CSS).

According to the agency’s records, a number of members have served as principal and alternate members at various times.

The Credentials Committee of the National Assembly began yesterday the cycle of interviews to those nominated for judge of the Electoral Tribunal (TE).

After a day of enrollment that included several provinces and various parts of the country, the opposition party Democratic Change (CD), added on Sunday more than 13,000 new members to its ranks.

A report of the United States Peace Corps volunteers who carried out social work in Panama reveals that, last year, 12 percent of them were a victim of a crime in the country.

An estimated 30 to 60 percent of the nation’s agricultural yield is lost every year to spoilage caused by inefficiencies in harvesting and transportation, an issue that has failed to be addressed by the current government.

The Institute of Agricultural Marketing (IMA) started from yesterday the purchase of domestic rice to the local agricultural industry, agglutinated in the National Mills Association (Analmo).

At a ceremony held yesteday, the Panamanian Football Federation and the sports company New Balance, announced the new shirt that the national team will wear in the hexagonal phase of CONCACAF on its way to the Russia 2018 World Cup.