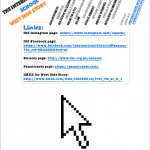 It is no easy feat putting on a production the scale of “West Side Story.” That is exactly what the International school is doing next week on the Thursday through to the Sunday. In the Studio with me after eight o’clock is Lara Vivone, Ellie Jones and Jorge Brito to tell us all about the production, how much hard work went into it and it is also putting money back with 10% of the income being donated.

In the last hour Gabriel from “The Visitor” gets us up to speed on what to do, where to go and the latest edition.

The Comptroller General of the Republic rejected a shortened tender of the Social Security Fund (CSS), for $2.1 million, to hold the World Social Security Forum between November 14 and 18, 2016.

President Juan Carlos Varela said yesterday that Social Security Director Estivenson Giron will have to defend the spending of $2.1 million for the organization of a world forum in Panama.

President Juan Carlos Varela was in charge of the protocolary acts of the celebration of the 195 years of the “Grito de Independencia” of Los Santos.

An Air Panama plane was evacuated in San Jose, Costa Rica yesterday due to a bomb threat.

The Deputy Minister of Housing, Jorge Luis González, said yesterday that the institution has built 54 thousand homes of social assistance since 2014.

The National Highway Company (ENA) has requested the Budget Commission of the National Assembly approve nine transfers of items that total $99.1 million to finance the construction of the fourth bridge over the Panama Canal.

Yesterday morning, three inspectors of the Transit and Land Transportation Authority (ATTT) were attacked on Avenida Libertador, La Chorrera, by four individuals, including one who was presumed to be a minor.

The German firm TUI, one of the largest tourism operators in the world, will make its debut in the Panamanian market on November 21st, when the first cruise will depart for the Panamanian coast.