Things to do, that is what we take a look at this Friday morning. Starting in the second hour of the program with a visit from Capt Steve Hooper from Taboga Express ferry service. Prior to the introduction of the new ferry’s a trip to the island (situated off of the coast of Panama City) you would be looking at a one hour journey. Now with the new service that has been cut down to just 30 minutes and there are multiple runs during the day so a trip out for lunch and back afterwards is not out of the question. 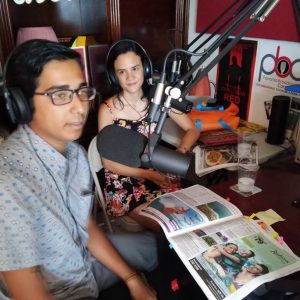 In the last hour we have our regular visit from Gabriel from the Visitor newspaper so it is a catch up on all that is happening not just around the city but throughout the country. Pick up a copy at most hotels, restaurants, supermarkets etc.

The Sixth Anticorruption Prosecutor attested, to the Supreme Court of Justice (CSJ), copies of the proceedings against Ricardo Martinelli, the Central American Parliament deputy and former president of the Republic.

The U.S. Department of the Treasury has published the reasons why Balboa Bank & Trust and its subsidiaries were included on the Clinton List, which prohibits U.S. citizens and companies from engaging in transactions with the bank.

The Social Security Fund (CSS) failed to raise the projected income during the first quarter of 2016.

The first container port in the country, with the capacity to serve the neopanamax ships, which will transit through the third set of locks of the Canal, will be built on Margarita island, in the province of Colon.

Panama’s debt will rise to $27.18 billion in 2021, an increase of $5.868 billion in relation to the amount at the end of 2015, according to projections of the Ministry of Economy and Finance. In five years, the gross domestic product (GDP) of the country is estimated to be $75.162 billion.

Yesterday morning, the National Police carried out an operation in the Chanis neighborhood, in which a man of Colombian nationality, wanted by Interpol, was captured.

The Panamanian Society of Engineers and Architects (SPIA) has presented a series of recommendations that seek to make improvements to the bill reforming the public procurement law.

The contest ‘Amigos Olimpicos’ will allow a child to be present at the opening ceremony of the Olympic Games, next August 5th in Rio de Janeiro, Brazil.