[/vc_column_text][thb_gap height=”75″][vc_column_text](Firstly, apologies for the late post we lost our connection on Friday getting it back today)

What a great way to start the day! Three bottles of great wine, Cabernet Sauvignon just happens to be my grape of choice and 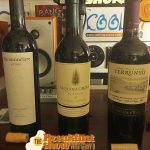 Carlos Mata our wine sommelier introduces us to two very different Cabernet’s, Terrunyo from Chile, Sequoia Grove from Argentina and the father of them all a Cabernet Franc (Ricominciare) from Argentina. Just another tough day at the office.

What to do and where to go, our Friday segment with Gabriel from the Visitor Newspaper. Full of great articles and suggestions for having a bit of fun.

A former Odebrecht official has told prosecutors working on the Lava Jato investigation that the firm created the statement of objections for the Bay of Panama sanitation project, giving it an advantage in bidding for the project.

France considered the scope of Panama’s signature of the convention for the automatic exchange of fiscal data “imprecise”, keeping the country on its list of “tax havens”, where it included it seven months ago after the publication of the so called Panama Papers.

On Oct. 12, the law firm of Morgan and Morgan presented a warning of unconstitutionality against the article of the family code that limited marriage to an act “between a man and a woman.”

The Administrator of the National Authority for Land Administration and Titling (ANATI), Carlos González, said that the institution will not title the lands of the Tanara Fair in Chepo, which have been invaded by about 250 families for two years.

The Supreme Court has revoked the Ministry of Health ruling that regulates the public bidding process for medications.

The Panamanian psychedelic rock band, Diafragma, is preparing for its tour on Cuban territory, within the framework of the Patria Grande Festival.