Friday 1st September 2017. Chill out with Fraktal Drum and what, where and when with Gabriel.

In the last segment of today’s program Gabriel with “What, where and when” things we can be doing over the weekend. Also we have friends of Garbriel “Fraktal Drum” Andres Garcia and Jairo de Leon, a unique use of synthesizer and the “Handpan” 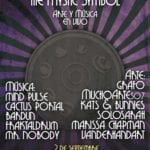 they will be performing tomorrow night at Azotea in Casco. If you like chill and ambient music you will like these guys. I have edited out the two tracks played live on this morning program below… Enjoy!

After the decision of Judge Edwin G. Torres to extradite Ricardo Martinelli, begins a series of steps to materialize the resolution.

The Public Prosecutor’s Office ordered the preventive detention of José Domingo Arias, former candidate for the presidency of the Cambio Democrático party.

The Supreme Court of Justice (CSJ) granted a protection of constitutional guarantees in favor of former Minister of Security José Raúl Mulino and former director of the Security Council Alejandro Garuz. Both former officials were investigated for the purchase of 19 radars from the company Selex, a subsidiary of Italian conglomerate Finmeccanica, for $125 million.

Representatives of the reverted areas, the Urban Citizen Network of Panama, environmental organizations and the Mayor of Panama are requesting the Ministry of Economy and Finance (MEF) to annex 15 hectares to the Camino de Cruces Natural Park that were transferred in 2013 by the National Assembly.

A judge of guarantees imposed yesterday morning several precautionary measures on Milagros Lay, who was charged with the alleged commission of the crime against the economic patrimony by means of a scam.

A variety of orchids can be seen during the XVII Flor del Espíritu Santo Fair, held in Las Minas, Herrera province, from yesterday until September 3.