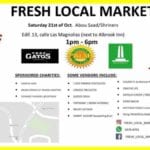 It is a big Breakfast Show welcome back to Miriam Tiblier, it is the time of the moth for the “Fresh Market.”  A new location for this month at the Shrine Building in Albrook. Plenty of great products (Beer for the first time!) and also the part I personally really like Adopt a Pet!

In the last hour today Amanda Barraza from the legal firm Morgan and Morgan. They have a business seminar on the 25th of October “Migration, Labor, and Fiscal Analysis for the Recruitment of Foreign Personnel in Panama.” We touch on a number of the topics that will be covered and if you want more information you can write to seiminarios@morimor.com or call 265 7777.

Yesterday afternoon, Panamanian businessman Nidal Waked pleaded guilty to money laundering charges before a federal judge in Miami, United States. Because of the agreement with the prosecutors of his case, the other charges against Waked, extradited from Colombia at the beginning of the year, will not be taken into account in court.

The Cabinet Council approved yesterday, during an extraordinary session, the modifications to the General Budget of the State for the fiscal period 2018 as recommended by the Budget Committee of the National Assembly.

Today begins the treatment of 108 patients of the Arnulfo Arias Madrid (CHDr.AAM) hospital complex in the Hemodialysis room of the Social Security Fund, located in the Santo Tomás hospital, in two shifts, from 6:00 a.m. to 5:00 p.m.

The Public Prosecutor’s Office (MP) reported yesterday that Judge Desiree Herrera applied the precautionary measure of provisional arrest for charges of international drug trafficking to eight citizens of Colombian nationality who were apprehended after the seizure of cocaine on a vessel.

Maritza Royo was designated as the new Deputy Minister of Government, as advised by the Ministry of Government.

Last Wednesday it was announced on behalf of Hernán ‘Bolillo’ Gómez that Panama would be playing two friendly games for FIFA in November, with a view to the 2018 World Cup and that the rivals would be the Iran and Wales teams.

The National Government of Panama officially declared Carnival celebrations for the month of February 2018 and announced that they could cost up to $2,200,000, of which most will be destined for activities in the capital, according to an executive decree.