Friday 23rd June 2017. Music master class and what, where and when with “The Visitor” 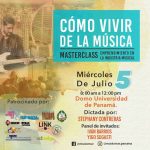 Natalie Grewe joins us this morning to talk about the upcoming master class and workshop for musicians and those that have and interest in music. July the 5th…  click on the flyer for more info.

End of the week… Where, what and when, that is what we find out with regards to happenings here in Panama with Gabriel and Sarah from “The Visitor” newspaper.

On Wednesday, Circuit Prosecutor Víctor Barrios secured before the Judge of Warranties a provisional detention measure against a 21-year-old man charged with an alleged crime against sexual freedom and integrity, in the form of rape, to the detriment of several minors in Chilibre, in the district of Panama.

The classes at the central campus of the University of Panama (UP) were suspended for three days, following protests by some students.

The Joint Task Force is carrying out an operation to retrieve the bodies of two teachers who were injured in the Ngäbe Bugle area since Sunday, June 18.

The Office of the Attorney General of the Nation revealed yesterday that the Office of the First Prosecutor against Organized Crime is investigating the transactions that were carried out for the purchase of a company, which groups several media outlets.

Doctors who fail to comply with their workday hours will be punished, warned Miguel Guerra, medical director of the Arnulfo Arias Madrid Hospital, of the Social Security Fund (CSS).

Around 840.5 million dollars have been allocated to the programs and projects carried out by the Ministry of Social Development (Mides), such as 120 at 65, the Network of Opportunities and Guardian Angel, in addition to infrastructure projects.

Musical creativity took over the Female Rehabilitation Center ‘Cecilia Orillac de Chiari’, with the Workshop of Acoustic Music developed by the Directorate General of the Penitentiary System (DGSP), through the Department of Treatment and Rehabilitation