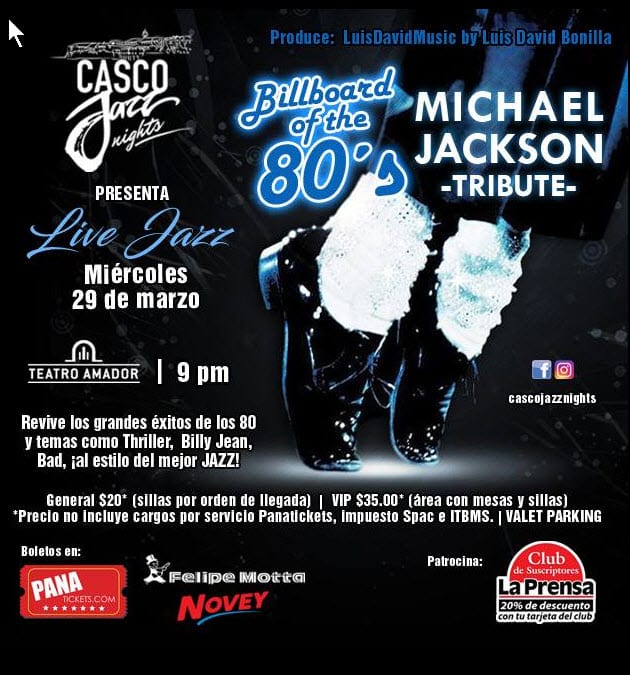 Luis David Bonilla is with us in the second of the hour promoting the upcoming event at Teatro Amador, jazz interpretations of the Billboard hits of the 80’s and Michael Jackson goes jazz. Also we get David to tune up the guitar and give us a tune.

In the last hour is it Gabriel and Sarah as we take a look at some of the articles and recommendations as what to do and where to go over the next week or so.[/vc_column_text][/vc_column][vc_column width=”1/2″][vc_column_text]The News:

The Partido Alternativa Independiente Social (PAIS) has put in motion the machinery to achieve, in the short term, its final registration as a political group.

The electric transmission company Etesa will change 40 transformers throughout the country to strengthen the power grid.

The Peruvian embassy and consulate general in Panama announced yesterday the opening of a bank account to receive donations to help the thousands of people affected by the floods in the South American country.

The Loma Cová consortium, made up of Constructora Meco and Acciona Infraestructura, won the contract to expand the Pan-American Highway between the Bridge of the Americas and Arraiján.

The Health City project, which will house the new facilities of the National Cancer Institute (ION), is up to 46% complete, confirmed the President of the Republic, Juan Carlos Varela.

The Panama City Revitalization project, which is being developed with a view to initiating a process of comprehensive urban and planned transformation in the central zone of the city, reports a 25% progress.