The epidemiological report of the Ministry of Health for this Thursday, reports 341 new cases of coronavirus and one death. There are currently 2,754 active cases throughout the country, of which 2,651 are in home isolation. While of the 103 hospitalized cases, 97 patients are in the ward and 6 in the intensive care unit. With the death reported in the last 24 hours, the accumulated total adds up to 8,160 deaths and the lethality is 1.1%. The report details that 7,089 tests were applied for a positivity of 4.8%. Health authorities reiterated to the population that in case of presenting symptoms related to Covid-19 , they should go to receive medical attention and undergo a test.

The Electoral Court (TE) gave a boost to the arguments that Ricardo Martinelli ‘s team of lawyers has used to delay the processes in which he is linked. Upon revoking a resolution of the Second Electoral Court of February 23, which ordered the lifting of the criminal electoral jurisdiction of the former president, the magistrates Heriberto Araúz (president) and Alfredo Juncá argued that Martinelli is protected by the principle of specialty consigned in the extradition treaty. between Panama and the United States. In addition, they argued that the electoral court did not give the due “motivation” at the time of lifting the immunity.

The Electoral Court (TE) points out that the information circulating on social networks about an “alleged” bank transfer of $150,000, in favor of Judge Heriberto Araúz , president of the Tribunal, is false. The alleged transfer would have been received by Araúz on the same day that the TE announced its decision to recognize the criminal electoral jurisdiction in favor of former President Ricardo Martinelli, who is being investigated for the New Business and Odebrecht cases. The decision was supported by magistrates Araúz and Alfredo Juncá ; Eduardo Valdés Escoffery saved his vote. Judge Eduardo Valdés Escoffery saved the vote. In his approach, he called it “totally inadmissible” to delve into the substantive analysis of the application of an exceptional principle, contained in an international treaty. 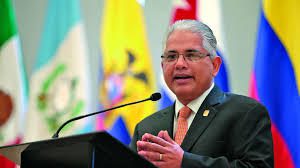 José Blandón Figueroa, president of the Panameñista Party, announced this Thursday, that they will present a lawsuit before the Supreme Court of Justice against the recent ruling of the plenary session of the Electoral Tribunal (TE) , which maintains the electoral jurisdiction of former President Ricardo Martinelli . “We have already requested lawyers from the Panameñista Party to prepare an action of unconstitutionality against the recent ruling of the Electoral Court, regarding the electoral criminal jurisdiction. It is time to say a resounding no to juega vivo and to impunity,” Blandón wrote on his Twitter account. The court had lifted Martinelli’s jurisdiction at the request of the third criminal judge, Baloisa Marquínez, who is investigating him for the New Business case, a process that tracks the purchase of Editora Panamá América (SA) allegedly with funds of the State.

The Ministry of Agricultural Development (Mida) issued this Thursday, March 24, a zoosanitary alert due to the possible risk of Highly Pathogenic Avian Influenza (HPAI) entering Panama, which was detected in Canada and the United States. The Mida authorities indicated that they have increased vigilance in the face of the outbreak, because the poultry breeding stock of Panama comes mainly from the United States.

Representatives from 11 countries arrived in the province of Darién to participate in a tour as part of the Regional Conference on Migration (RCM) that began this Thursday. Deputy Foreign Minister Marta Elida Gordón, who is leading the Panamanian delegation, said that the visit of the international delegation to the province “will serve to learn about part of the harsh migratory reality of those who irregularly cross the Darién border, risking their lives”. “It is an awareness that will help us have more references to make appropriate decisions in the face of a phenomenon that impacts us all and we must face together,” he added.