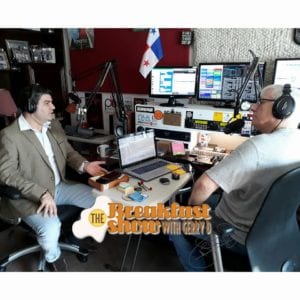 As we come into our month of celebrations “Mes de la Patria” educator and historian Montgomery Johnson joins me in the second hour. We go though most of the events that make up this special month, independence from Spain, independence from Colombia and we also chat about the “Patriotic Symbols” the Panama Flag, the Coat of Arms and the National Anthem.

Once again the first lady, Lorena Castillo, has ignited social networks. On this occasion, the wife of the President of the Republic, Juan Carlos Varela, asked for the president of the Judicial Branch, José Ayú Prado, to be put in prison, as well as those she considers to have ‘plundered the country’.

This caused an avalanche of comments both for and against.

The Foundation for the Development of Citizen’s Freedom, Panamanian Chapter of Transparency International (TI), joined the voices that question the decision of the Twelfth Criminal Court in denying an extension to the Special Anti-Corruption Prosecutor to continue with the investigation related to the bribes paid by Odebrecht.

The hearing of approval of the effective collaboration agreement between the Brazilian construction company Odebrecht and the Public Prosecutor’s Office (MP) was postponed to November 9, 2017, the Judicial Branch reported yesterday.

With an investment of more than $350 million, the President of the Republic, Juan Carlos Varela, inaugurated yesterday the third electric transmission line in Llano Sánchez, Coclé province.

The plenary session of the National Assembly approved yesterday, in a second debate, Bill 492, which adopts measures to promote the use of reusable bags in commercial establishments.

The “Caribbean Princess” became the first neopanamax cruise ship that transits the expanded Panama Canal locks during the 2017-2018 season.

The 2017 Medio Pollito Children’s Stories Contest, annually carried out by the National Institute of Culture (INAC), chose as winner the tale “Saly and the Magic Water” written by Mylanis Atencio, who attends the fifth grade at the Rómulo Arrocha school in the province of Veraguas. The story was presented under the pseudonym La Vaquerita