Friday 28th April 2017. Opera with Club Leones and What’s happening with the Visitor. 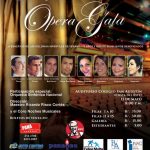 Opera with Club Leones de Panama. An organization that does so many great things for the children of Panama as well as being the sponsors of the Hospital de Nino. They have a very special fund raising event coming up on the 11th of May “Opera Gala.” We chat with Jaime Maduro and Carlos Rogers about Club de Leones and the event.

Defense attorneys for former Caja de Ahorros (CA) Chairman Riccardo Francolini have requested that the interview of their client be delayed.

Benicio Robinson, a deputy for the Partido Revolucionario Democrático (PRD) and its president, came out in self-defense before the criticism regarding the delay in the ratification of Alfredo Martiz as the new director of the Social Security Fund (CSS).

Electoral Court (TE) magistrates have recommended that the executive sanction the bill reforming the Electoral Code, although they do not agree with all the changes that were introduced to the proposal approved last week.

Yesterday morning, an operation was carried out against clandestine lodging in the Chanis neighborhood.

The contract between the government and the company Banapiña de Panamá, S.A., a subsidiary of Del Monte, is expected to net the company $549 million over the first seven years of the deal.

The Air Safety Commission of the Colombian Congress will ask the Foreign Ministry to negotiate with Panama so that Colombian airplanes that go to the island of San Andrés stop paying money to use Panama’s air space.

Yesterday, was the press conference of the Afrofestival Internacional 2017, in May, Black Ethnicity Month.