Friday 28th October 2016. TVN Heroes of Panama and “The Visitor” 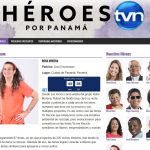 The TVN (local television channel) is having the annual “Heroes of Panama” competition. It is an opportunity to vote for people that are doing great things for the country. One of the contestants is Robert Baum. If you are a regular listener to the program you will know Robert as the instigator and power behind the monthly recycling fairs. Coming in to talk to us about the program and how to vote is Dovi Eisennman. How to get involved and vote for Robert.

In the last hour today as is a custom on a Friday, Gabriel from the Visitor newspaper is here to advise us what we can be doing in the coming days and what is in this weeks edition. Check out the visitor on Line…

Lawyer Luis Garcia, an activist in the Democratic Revolutionary Party (PRD), presented to the Electoral Court an appeal warning “to prevent fraud and cronyism in the PRD X General Congress, to be held on October 30”.

President of the Republic, Juan Carlos Varela, warned the authorities of Colon that he “will not allow” the use of the Atlantic coast for drug trafficking. The president’s statements came during the Cabinet Council held on the Atlantic Coast.

In the last quarter of this year, the Democratic Change (CD) is the political party that has added more members, according to statistics of the Electoral Tribunal.

Panama City Mayor José Isabel Blandón asked residents and merchants from San Francisco to attend a meeting where they can discuss a partial plan of land use for the area.

The Government of the Republic of Panama signed yesterday in Paris, the Convention on Mutual Administrative Assistance in Tax Matters.

A report of the Office of the Comptroller-General reveals that the 89.7 percent of the cell phone lines that operate in the country are prepaid.

Next November, the National Plan for Sustainable Fisheries will be validated, announced the director of the Aquatic Resources Authority of Panama, Zuleika Pinzón.