Professional golfer Guy Cross gets us up to speed on the world of Golf. With a tournament taking place this week at the Club de Golf, who is playing, what is the state 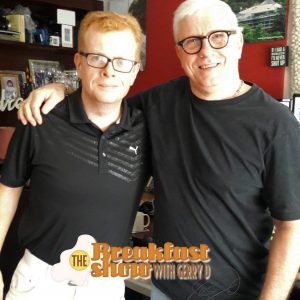 of Panama’s golf and what is happening internationally. Plenty to talk about. You can get in touch with Guy through his Facebook page.

A big Breakfast Show welcome back to Alfredo Hidrovo the man with the talent behind the “Luna Llena de Tambores.” We had the big event at the Parque Omar this last Wednesday and on Saturday it will be taking place in La Chorrera at 6pm. We chat about various musical topis with Alfredo and he brought along his guitar… take a listen.

The crime of theft of public documents was imputed to Judge Felipe Fuentes by Judge of guarantees América Vergara, after the loss of a file from the Financial Pacific (FP) case, which was found in Loma Cova in Arraiján.

After listening to the arguments of prosecutor Roxana Hernández, on behalf of the Superior Discharge Office of the Public Prosecutor and of prosecuting attorneys in the case of mass poisoning with diethylene glycol, Elizabeth Berroa decided not to accept the request to suspend the sentence of René Luciani, former director of the Social Security Fund.

The president of the Republic, Juan Carlos Varela, will make the appointments of the new magistrates to the Supreme Court of Justice (CSJ) after carnivals.

The participation of the company Panama NG Power in the energy market, whose tender took place during the administration of Ricardo Martinelli, would cause significant changes in the rate paid by consumers and would disrupt the composition of the market, according to the analysis of the authorities of the sector.

The Contentious Administrative Third Chamber of the Supreme Court of Justice declared null and illegal the ‘revalidation’ of a building permit that was approved in 2012 by the Works Directorate of the Municipality of Panama to the PH Bahía del Golf project in San Francisco.

Up to $70,000 was approved by the Cabinet Council to develop a study that allows an understanding of the current employment situation in the Republic of Panama, reported the Panamanian Government.

Inspectors of the National Immigration Service and units of the International Criminal Police Organization (Interpol) detained a Guatemalan citizen, wanted in the United States for the crime of drug trafficking, by order of arrest for extradition purposes.

Some 590 workers of the Urban and Domiciliary Cleaning Authority (AAUD) will carry out the cleaning work during the 2018 Carnival, which will take place on the Cinta Costera from February 9 to 13, between sweepers, collectors, operators, drivers, supervisors, special maintenance, technicians and mechanics.

From today until next Friday, February 16, 95 octane gasoline will go up two cents per liter, to be sold at the Panama and Colón stations at $0.84 a liter or $3.19 a gallon.

A practical guide for the restoration of degraded mangrove areas was presented yesterday during a workshop in the capital city, as part of the celebration of World Wetlands Day today.