Friday 7th June 2019. Don’t lie, it’s about the Polygraph. Entertainment with Yaz and the Visitor.

We have with us Francisco Smith who talks to us about the Polygraph, how it works. Can you cheat it? Not according to Mr Smith. 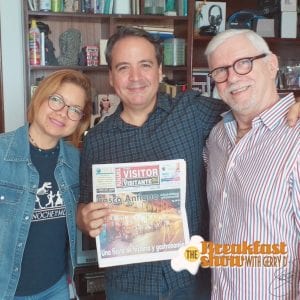 Goodto have the “Visitor” newspaper back with us, Augusto Velasquez and Yazmin take a look at the what, where and when of Panama. Some of the places to go and have a good time over the coming weeks.

After his transfer to the city of Houston (United States) the five year old minor Miguel Ignacio Munoz Lima, who was victim of an explosion at  PH Costa Mare on May 31, began receiving the first skin treatment, it was reported Thursday.

In the continuation of the trial that is followed against former President Ricardo Martinelli for wiretapping, the protected witness declared yesterday that there was a directive so that the “special affairs” group that operated in the Security Council (CSN) would not report to the executive secretary, but directly to the ex president.

President  Juan Carlos Varela said Thursday June 6 that his term will end on June 30 with many enemies.

The Attorney General of the Nation, Kenia Porcell , and the Vice President-elect  José Gabriel Carrizo held a meeting on Thursday, June 6, as part of the transition process.

The value of approved construction permits in the main districts of the country totaled $ 242.5 million in the first quarter of the year, a figure that represents a fall of 25.5% over the $ 325 million recorded in the same period of the previous year.