Monday 11th June 2018. Anniverary Song and a rummage around the Internet. 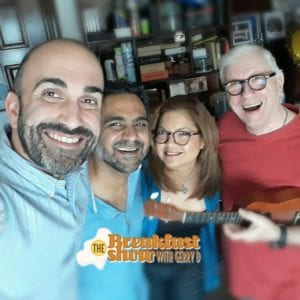 Fun time! It is always a good laugh when we have our guests that are with us in the second hour today Amit Nathani and Joe Mezquita. We have been running a bit of a competition with listeners sending in a Happy Anniversary videos. Amit and Joe did just that and we thought we would drag them in to chat and perform it for us.

The US State Department approved the extradition of former President  Ricardo Martinelli to Panama, to face charges for the unauthorized interception of communications by the National Security Council in the last two years of his term.

Judge Harry Diaz  explained on Friday June 8 that with regard to the complaint filed by  the comptroller Federico Humbert against the deputy president of the National Assembly, Yanibel Ábrego , there was adequate proof.

President  Juan Carlos Varela announced that he will travel to Russia on today, June 11 to participate in the first game of the National Team in the World Cup.

The Institute of Aqueducts and Sewers National (Idaan) reported on Saturday afternoon June 9 that the water treatment plant of Chilibre decreased its output by 10% due to the high level of turbidity in the water.

Floods in the sectors of El Crisol, San Antonio and Don Bosco were reported yesterday afternoon, June 10, as a result of heavy rains in the city.

The Ministry of Health (MINSA) reported that it conducts training for emergency personnel, with the aim of addressing any event or emergency that may arise during the  2019 World Youth Day , an event that will be held in Panama from the 22nd. to January 27 next.

The Joint Task Force (FTC) located two people who had disappeared, due to the heavy downpour that fell in Cerro Bejuco, West Panama.