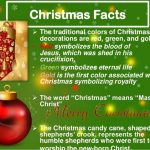 Join me for three hours of great music and rummage through some interesting (or not!) Christmas facts.

A joint investigation by ProPublica and the Stabile Center for Investigative Journalism at Columbia University included former President Ricardo Martinelli on the list of international politicians who have found refuge in the United States to evade judicial processes in their home countries.

80% of the commercial premises in Casco Antiguo part of Panama City are not registered and evade the employer’s labor quota, confirmed an inspection by the staff of the income management office of the Social Security Fund (CSS).

Five years after the implementation of the system that allows clients to keep their numbers when they change phone service providers, a total of 752,952 customers have changed companies.

December 26 and Monday, January 2, 2017 will be mandatory days off, both for public offices and private companies.

Panama has received a low score from the International Civil Aviation Organization, which audited the country in 2015.

The population that neither studies nor works, also known as the ‘Ninis’, appears to be changing its behavior, according to the results of the latest labor market survey compiled by the Comptroller General of the Republic.

The body of a man was found Friday under one of the bridges of the Corredor Sur, near Tocumen. For now, the identity of the individual is unknown.

From December 20 until the 23rd, the Social Security Fund (CSS) will make the payment of the Christmas bonus to about 240 thousand retirees and pensioners.

Panamanian Roman Torres scored the deciding penalty on Saturday to lead the Seattle Sounders to the championship of Major League Soccer (MLS).