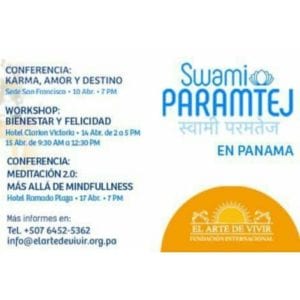 Calm and composed after dealing with Panama’s traffic, we welcome Swamiji Paramtej who is visiting Panama giving talks on self betterment.

In the last hour we go Spanglish. With an innovative way to learn English Nestor Venoza and Enrique Eccles introduce us to Natural English. Check it out by clicking the picture above.

The Public Prosecutor’s Office, the Ministry of Economy and Finance (MEF) and the Office of the Comptroller General of the Republic will investigate the evasion of payments of some $ 300 million in worker-employer contributions by employers to the Social Security Fund (CSS).

The administration of the Canal will take several weeks to complete the investigation to determine the level of responsibility of a group of captains who last Thursday refused to work with just two sailors aboard the tugboat that is used at the front of the Neopanamax to transit through the Canal.

The Anticorruption Discharge Office of the Public Prosecutor, in charge of Javier Miter, requested to call to trial those involved in the alleged irregularities in the loss of and purchase of weapons from  the Institutional Protection Service (SPI).

Not even the deputies are safe from the ravages of crime. This time, three men stole money, a vehicle and jewelry from the deputy of Cambio Democrático (CD) Vidal García and his family.

The sale of new cars in Panama in the first two months of 2018 fell 10.5 percent to 7,843 units compared to 8,768 in the same period of 2017, according to data from the National Institute of Statistics and Census (INEC).