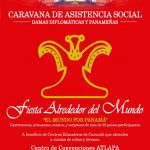 It is coming up to that time of the year again “Caravana” the time to meet all those people that you have not seen since the last Caravana. In the last hour this morning we have Rita Medina, Giuliana Motta and Alexandra Vizor to give us all the info on this years event. They have a special deal for first time users from UBER and a schuttle bus running from Costa del este and Torre Las Americas. Absentees this year Canada and for the first time since the inception of Caravana the UK!

The National Assembly has decided to postpone the discussion of the proposed reforms to the Electoral Code until the session which begins Jan. 2, 2017.

The Comptroller General of the Republic, Federico Humbert, announced that the institution will conduct a financial audit of the documents of the loan made by the Caja de Ahorros Bank (CA) to the company HPC Contratas in 2012.

Carlos Gavilanes, the legal representative of several victims of the La Cresta bus fire, said that the justice system has ignored many of those culpable for the incident that left 18 people dead and a number of others injured.

President of the Republic of Panama, Juan Carlos Varela will meet tomorrow with President of Colombia, Juan Manuel Santos at the Nicanor Base of the National Air Service (Senan), located in Metetí (province of Darien) a border area for both countries.

Four companies have expressed interest in a $2.1 million project to rehabilitate Urraca Park, in Bella Vista.

The Cable Onda communications service was interrupted nationally in the afternoon hours of Saturday, October 22.

Production of alcoholic beverages in Panama improved just 2.7% in the accumulated period from January to August 2015-2016, after the sharp fall recorded following the tax imposed by the national government last year.

A survey carried out by anti-gang prosecutors has revealed that these criminal groups have diversified their criminal activities ranging from extortion, car theft and kidnapping.

A research to design a strategy to promote international congresses and conventions as a tourism strategy in Panama was agreed upon by the Government of Panama and Messe München, a German international operator of the exhibits industry.