The second hour is about snoring! There is nothing worse than being kept awake by your partners snoring or for that matter the person sitting next to you on the plane. My guests this morning have the solution, it is called ‘Asonor.’  To talk to us about the issues regarding snoring, how it occurs, what is responsible for the snore, as well as the prevention we have Paul and Augusto. Hear what they have to say and by the way for more information you can visit Asonor. 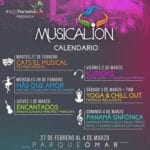 It does not seem possible that a year has elapsed since we were talking to Madelaine Leignadier about the Musicalion. This years event starts tomorrow though to Sunday. Click the pic above for the full information.

Yesterday, the President of the Republic Juan Carlos Varela was welcomed in Dubai by Sultan Bin Saeed Al Mansouri, Minister of Economy of the United Arab Emirates and Majid Saif Al Ghunair, President of the Chamber of Commerce and Industry.

The Panameñista Party deputy, Jorge Iván Arrocha, said yesterday that the election of new members of the Credentials Committee will remain suspended until the Supreme Court of Justice (CSJ) resolves the warnings of illegality presented.

Several sectors of the city center will be without drinking water service for several hours from tomorrow, February 27, because the National Institute of Aqueducts and Sewers (Idaan) will repair the 30-inch pipeline in via Brazil, which broke last Thursday, February 22.

At the public prosecutor’s offices and the Municipal or Circuit Courts of Panama, Panama Oeste and San Miguelito there are 1,831 criminal lawsuits for the undue retention of employee-employer contributions, reported the Social Security Fund (CSS).

The creation of new jobs in the public and private sectors between August 2016 and August 2017 was not enough to stop the growth of unemployment.

The inauguration of the Historic Summer 2018 had a large influx of tourists, as announced on Sunday by the Tourism Authority of Panama (ATP).