“Fast Friending”. It is an interesting story as to how Deborah ended up in Panama, like many it was not the original intention. Now though Panama is home and we chat about the concept behind Fast Friending and how it came to fruition. Also how you can become a part of the friending group. 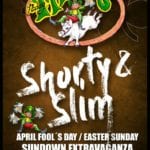 In the last hour today it is a big Breakfast Show welcome back to Alex Reyes of Shorty and Slim. They have an event coming up on Sunday the 1st of April and yes, Shorty will be in Panama and performing with Alex (Slim) click on the pic to see the event details. Alex sang “It’s not a race” live this morning but we thought you may enjoy the video that goes with the song.

The First Superior Court rejected an amparo of constitutional guarantees presented by the lawyers of the ex-director of the Social Security Fund (CSS) René Luciani , who was sentenced to 18 months in jail for the poisoning of CSS patients with the toxic diethylene glycol .

A Court of Appeals confirmed this Friday, March 23, the decision taken by a compliance judge that declared the sentence of imprisonment imposed on Ignacio Torres Echeverría , who was sentenced to 18 months in prison for the case of the poisoning with diethylene glycol,  be expunged .

Although they work, thousands of Panamanians live on the edge of exclusion. With their income they can barely cover the basic food basket. This happens in the same nation whose per capita gross domestic product in 2018 will be the highest in the region, according to the International Monetary Fund .

The Delegate Drug Prosecutor’s Office of San Miguelito requested the provisional detention of three foreign citizens (two Chinese and one Mexican) for the crime against collective security and money laundering, an event that occurred on the premises of a shopping center in the Brisas del Golf neighborhood. , corregimiento José Domingo Espinar, district of San Miguelito.

The Thirteenth Criminal Court of the First Judicial Circuit of Panama set this Thursday, March 22, the date of the ordinary hearing within the process being followed against the former Minister of Social Development (Mides) Guillermo Ferrufino , for the offense against public administration in the form of corruption of public servants, due to the purchase of a 2013Toyota Land Cruiser vehicle.

The Ministry of Health (Minsa) in  Los Santos confirmed that the Tonosí Valley region registers 58% of hanta virus cases , the highest rate in the province and in the rest of the country so far this 2018.

Six years and two months after its implementation in the country, the number that have utilized telephone number portability exceeded one million who have migrated from one provider to another, informed the National Authority of Public Services of Panama.