Monday 28th January 2019. You, me, music and a rummage around the Internet.

You, me and the music. A look at relevant events for today’s date and some strange stories.

After operating since January 18, line 2 of the Panama Metro will suspended its service at 11:59 pm last night.

Officials from the Environment Ministry (Miambiente ) and the  Panama Maritime Authority (AMP) began an investigation on Sunday afternoon in respect of the death of a “large amount” of fish in the Amador area.

The mayor of Las Tablas, Noé Herrera, ordered this weekend the closure of the municipal landfill of the district until the accidental fire at the site is controlled.

Six people are being investigated by the Special Anticorruption Prosecutor’s Office , for supposed cost overruns in the restoration works of the Old Quarter of the capital during the last government, work that was under the charge of the construction company  Odebrecht. 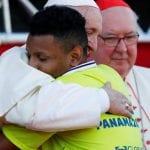 The pontiff arrived at the Rommel Fernández stadium, the headquarters of Panamanian football, where thousands of volunteers waited for him. The mission was for him to express his gratitude. Give thanks for the work they did. It was with them that he decided to make his last large meeting in the country, before leaving for Rome.