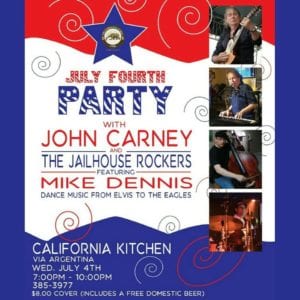 Musicians John Carney and Mike Dennis are with us during the second hour of this mornings program. Both living in Panama will be performing at the California Kitchen Pub on Wednesday (USA Independence). We chat about their careers, Mike is not just a musician but a professional poker play, author and an audio book artist. John is a well established and recognized artist, on this mornings show we play a piece that he performed with the Woodlands Symphony Orchestra.

Judge  Oydén Ortega will be the speaker in the protection of constitutional guarantees presented by the defense of former President Ricardo Martinelli , who is being prosecuted for the alleged commission of crimes against the inviolability of secrecy and the right to privacy, and embezzlement.

The president of the Republic, Juan Carlos Varela , said on Friday, that at no time did he request a list of three candidates for the replacements of  magistrates Jerónimo Mejía and Oydén Ortega , whose term expired on December 31, 2017.

Commissioner Gilberto Méndez Jaramillo took office on Friday, June 29, 2018, as General Director of the National Aeronaval Service (Senan). This, after the retirement of the director Belsio González which was effective from the 29th June.

One dead was the result of a shootout which took place on Friday in the afternoon, on the South corridor, at the height of Llano Bonito and in the direction of downtown Panama.

The Social Security Fund (CSS) reported that starting Monday, July 2, will be placing Tenckhoff catheters in the Susana Jones Cano Hospital (located in Villa Lucre) to patients with chronic kidney failure who qualify to enter the peritoneal dialysis program.

The streets of Casco Antiguo were chosen to carry out in Panama the “LGBTIQ Pride March”.