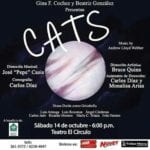 Busy start to the week. In the second hour today Gale Cellucci and Gina Cochez are with us to talk about the production of “Cats” being presented at the Teatro Circulo. A huge event for the theatre with some tremendous talent Bruce Quinn is the Artistic Director, others involved Carlos Diaz and Monalisa Arias. Lead role being taken by Diana Duran playing Grizabella… Don’t miss out, Cats running until the 29th October and there is a special performance on the 14th of October supporting FUndacion Casita de Mausi. You can get tickets at Panatickets.com, Felipe Motta and Novey stores.

In the last hour, two more ladies. Rita Sosa and Carol Hensel. As we get closer to Caravana at the end of October things are starting to get moving with a USA and UK Quiz Night that will be taking place this Thursday at the Wyndham Hotel. Make sure you get your tickets today. how? click here for more information or you can WhatsApp Carol on 6480 9504. Don’t delay buy today.

Tropical storm Nate, which became a hurricane on its way to the United States on Saturday, left 4,974 people affected in several provinces in the country, according to a report by the Joint Task Force.

Today will resume classes in Chiriquí, now that the rains have ceased, however in the Ngäbe Buglé region, the classes will continue to be suspended until Wednesday, October 11.

Given the panorama of impunity for investigations of corruption offenses against the Panamanian state, a bill submitted by citizens proposes to modify an article of the Criminal Procedure code, which seeks the non-prescription of criminal proceedings.

The Panama Maritime Authority (AMP) has announced that the ship that ran aground on October 6, 2017, in an area near the Corredor sur, has been removed.  The boat “Don Francisco I” was taken to a safe place, where it does not affect navigation, indicated the AMP.

How far have we come? some people are wondering, after a naked woman was seen on the streets of Panama, sitting on a car window.

Three members of a family are in a delicate condition following the fire which was recorded on Sunday morning in the apartment where they live, located in the residential Los Lagos in Colón.

An urban project will be developed in the Guna Yala region, as revealed by the Ministry of Housing and Territorial Planning (Miviot), through a statement.

The National Institute of Culture inaugurated on Thursday the bookstore ‘The House of the writer’, the main purpose of which is to “be an open space for writers, intellectuals, students and others interested in reading, to find books by winners of national and international competitions,” said Priscilla Delgado, National Director of Publications.