Thursday 16th May 2019. Tech talk with Dr Computer and a Cantus choral event.

Welcome back to Dr Computer (Alex Neuman). With a recent breach of data reported in Panama we take a look at what constitutes a data breach. Information on a server regarding personal details of members of the Social Security Fund was exposed, however in this particular case the the hacker reported the leak and it was not announced until the issue was resolved. 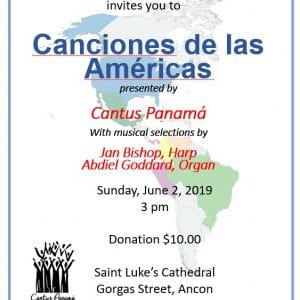 In the last hour today the choral group “Cantus” is represented by Nancy Boyd. Cantus is a great supporter of the St Lukes Cathedral part of Panama’s history they present a couple of concerts per year to help towards the costs. The upcoming event is on the 2nd June at St Lukes 3pm. Put it in your diaries.

The oral trial of former President  Ricardo Martinelli  resumed with some delay, since the hearing room originally assigned for that purpose was occupied by the parties in the “El Gallero” case .

Members of the Executive Board of the  International Monetary Fund concluded on May 15 a three-day official visit to Panama that led them to meet with the President of the Republic, Juan Carlos Varela, the Minister of Economy and Finance, Eyda Varela de Chinchilla, as well as representatives of the financial and business community of the country.

The Department of Pharmacy and Drugs of the Ministry of Health (Minsa) ordered the suspension and use of batches of 53 products containing Valsartan, Irbesartan, Candesartan and Olmesartan, all for high blood pressure.

The Financial Analysis Unit (UAF) and the Crime Stoppers organization launched on Wednesday May 15 a digital platform that allows citizens to report possible cases of money laundering.

At least 17 drillings have been carried out by the personnel of the  Panama Canal Authority (ACP) in the community of La Pitaloza, in Los Pozos (Herrera), as part of the feasibility studies for multipurpose reservoirs in the river basin.