In the second hour today we have a wonderful treat. Cellist Karina Nuñez makes a return visit and j 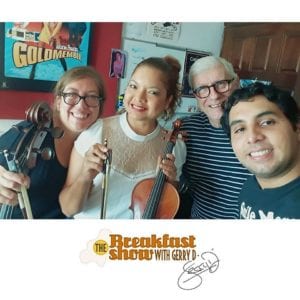 oining her is Violinist Juan Pablo Sanjor. They are venturing out on a new project “Consort-Musik” and they are presenting a performance on the 3rd of June. You can find out more info click logo above.

They both brought their instruments with them and here they are playing live on the Breakfast Show….

The staff of the National Directorate of Forensic Auditing of the Office of the  Comptroller General of the Republic entered the National Assembly on Wednesday, May 16  , with the intention of making a “formal audit” of the use of  Form 080 , corresponding to “bonuses, incentives and other personal services, ” but deputy president  Yanibel Ábrego  reported that she filed an amparo of constitutional guarantees

The president of the Republic, Juan Carlos Varela,  who is accompanied by the first lady, Lorena Castillo , began his working tour of Israel on Wednesday.

The Panama Fire Department reported on Wednesday May 16 that an electrical fault caused the San Miguelito Metro station to fill with smoke.

The  Panamanian Society of Engineers and Architects (SPIA) held on Tuesday May 15 a tour of the Calle Uruguay area to verify the progress of the work.

The  Panamanian Chamber of Construction (Capac) approved a general assembly on Tuesday May 15 to increase its salary proposal to 3% per year, according to sources from the construction sector.

At the request of the Office of Decision and Litigation in Darién, the arrest was legalized and the precautionary measure of provisional detention was applied to a citizen for the crime against sexual freedom and integrity, in the form of aggravated carnal rape to the detriment of a minor.

The Court of Sanitation of the Mayor of San Miguelito, ordered the temporary cessation and dissolution of a bread distributor, located in the sector of Cerro Batea, Omar Torrijos corregimiento, due to multiple administrative faults such as: unhealthiness, employees working without a health card and others without a shirt; liquor was detected on the premises, where, as if that were not enough, they also repaired cars.