The traffic got the best of our guest this morning unfortunately, so… It is just you me and the music this morning and a rummage around some of the things relevant to today, either in the news or things that happened on this day.

For example (Dame) Nellie Melba was born on this day in 1861 – She was an Australian opera soprano. She became one of the most famous singers of the late Victorian Era and the early 20th century due to the purity of her lyrical voice and the brilliance of her technique. Melba was the first Australian to achieve international recognition as a classical musician. 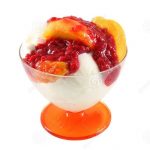 Now more to the point a dessert of peaches and raspberry sauce with vanilla ice cream is called the Peach Melba. The dish was invented in 1892 or 1893 by the French chef Auguste Escoffier at the Savoy Hotel, London, to honour the Australian soprano Nellie Melba.

The Cabinet Council approved on Tuesday reforms to the 1990 decree which establishes the payment of consular fees.

Entering its third strike day, the Panamanian Veterinarians Association has begun intensifying its actions: it approved a 24 hour work stoppage in health inspections and surveillance at airports, seaports and land borders.

The National Secretariat for Childhood, Adolescence and Family (Senniaf) announced on Wednesday that it will return a child to the foster family that had cared for the child for the last four years.

The Cabinet Council authorized Minister of Social Development, Alcibiades Vasquez, to propose Bill No. 024-16 to the National Assembly, which creates the National Secretariat for the Progress of populations of African descent.

Tired and desperate, hundreds of immigrants, mostly Cubans who entered Colombia illegally, are stranded near Panama a week after this country said it would stop them from entering the country as part of their quest to reach the United States.

Visiting a museum is like taking a trip through history. It enriches your knowledge, whether it be on scientific topics, human evolution or the history of a country.