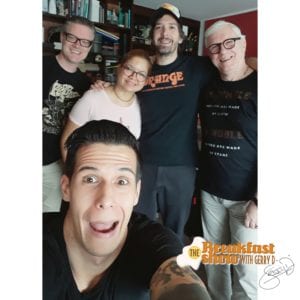 In the last hour our guests are Spike Slawson, Poti Far and John Fochaux. The band Ex Novios will be playing with special guest Spike at El Sotano on Friday 28th make a point of putting it in your diary.

On Wednesday, September 26, the indictment hearing was resumed before magistrate judge  Jerónimo Mejía, in respect to the process that is followed  against former President Ricardo Martinelli , for the alleged commission of the crimes of embezzlement and against the inviolability of secrecy and the right to privacy .

The National Institute of Vocational Training and Training for Human Development (Inadeh) alerted the population to the fact that for some weeks people and companies outside the institution are promoting courses and programs on social networks claiming they have the endorsement of Inadeh.

Workers of the Cobre Panama project held a meeting on Wednesday 26 with the Minister of Labor,  Luis Ernesto Carles.

The director of the National Authority of Transparency and Access to Information (Antai), Angelica Maytin , reiterated on Wednesday September 26 that, to date, the institution in charge has not obtained the 080 form of the National Assembly .

Tropical Storm Kirk has begun to gain strength in the eastern Caribbean, the National Hurricane Center in the United States said on Wednesday.