Thursday 2nd May 2019. Bringing Venezuelan comedy and art to Panama. 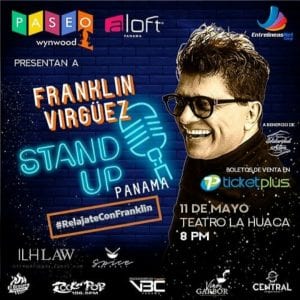 My guest with me today Sr Gustavo Ignacio Gomez a theater and film producer. Gustavo is  bringing a fantastic standup comedian from Venezuela to Panama, a famous actor celebrating 45 years of show business, with a standup chock full of gossip and fun.

After his tour through 5 countries, the well-known Venezuelan international actor Franklin Virgüez arrives in Panama, direct from Miami, with his show RELÁJATE CON FRANKLIN! A comedy that guarantees laughter and nostalgia, but above all, joy.

More than 10,000 spectators have seen him on his tour of Latin America, Canada,

Europe, and every Thursday at the stage of the renowned Paseo Wynwood, in Miami.

Which is another great project bringing Paseo Wynwood to Panama, have a listen and hear all about it.

The  Cabinet Council approved the payment of an extraordinary bonus of $ 100 to pensioners and retirees, informed the State Secretariat of Communication.

Starting tomorrow, May 2, the  Social Security Fund (CSS) will apply a new strategy in the process of granting specialized appointments at the Dr. Arnulfo Arias Madrid Hospital Complex.

The government extended for six months more the ability to accept cash in the luxury transport service through Information and Communication Technologies (ICT) , as in Uber, Cabify, among other platforms.

Panamanian workers celebrated their day yesterday, with a peaceful march in the capital city.

In search of water, large numbers of livestock are getting stuck in the lagoons, reported farmers in the region of Azuero.

With the approval of five bills in the third debate, the farewell of some deputies who will not seek re-election on May 5, failures of the electricity system that left the legislative chamber without power for a few seconds, and with 45 pending projects on the agenda , the plenary session of the  National Assembly (AN) closed yesterday its fifth period of ordinary sessions.

The rating agency Standard and Poor’s (S & P) raised the risk rating of the Republic of Panama from BBB to BBB + .