Tuesday 15th November 2016. Yoga event and Yoly, how to eat and sleep. 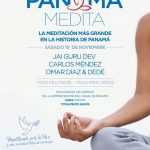 It is a healthy Tuesday morning, Corina Clemente talks to us about Yoga and meditation as well as an event which will take place this coming Saturday the 19th at the Administration building of the Panama Canal, click on the picture for more information.

In the last hour today Yoly is back with us and this time it is all about food and sleep, what we can and should not eat to help us get that good night we need. Today’s recipe Baked Broccoli Tater-Tots, click the pic to go to the ingredients and instructions….

For the second time the 14th Criminal Court has postponed the conclusion of the preliminary hearing on the failed Tonosi irrigation project.

In May 2015, a Venezuelan businessman, brother-in-law of Senator Cilia Flores de Maduro, wife of Venezuelan President Nicolas Maduro, decided to buy a residence in Panama.

The abuse in the use of licenses by deputies, which are excuses to avoid meetings, has once again been raised by critics of the legislature.

The internal conflicts of the International Maritime University of Panama (UMIP), which have reached their climax with the accreditation of two “rectors elected”, have motivated the intervention of the Attorney General, Rigoberto González.

Special Prosecutor Against Offenses of Intellectual Property and Computer Security Ricaurte González said that he is receiving the first reports of businesses in Panama being held hostage by cyber terrorists.

The High Prosecutor’s Office specializing in Crimes of Illicit Association, under the leadership of Julio Villarreal, summoned yesterday afternoon the units of the National Police to be processed for alleged connection to drug trafficking.

The traditional Christmas parade will be held this year on Sunday, December 11 in the Cinta Costera, said the mayor of the district of Panama, José Isabel Blandón.

The Panamanian youth expressed itself on Sunday night in the grand finale of the National Speech Contest 2016, but it was Damaris Santamaria, from the Ángel María Herrera High School in the province of Coclé, who performed best at the Anayansi Theater of the Atlapa Convention Center.