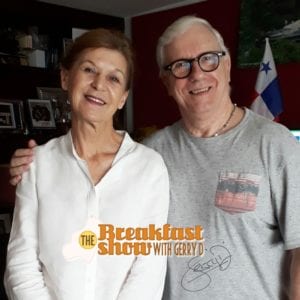 A Breakfast Show good morning to Sylvia Benassy Directora general of Aliance Frances. Sylvia takes us through the events being put on by Aliance Frances this coming Thursday through to Sunday the 24th June. You can also check it out on their Facebook page.

For the last time for a few weeks we have Sara Solomon our Fiesty Foodie, she leaves this evening for Canada. What we take a look at today are some great spicy snacks that you can enjoy whilst watching the football!

The Supreme Court reported that today, June 19, a hearing will be held to review the request for a change of precautionary measure for the former President Ricardo Martinelli , who has been detained in El Renacer prison since June 14.

The  Electoral Tribunal (TE)  reported yesterday that citizens must report and submit the corresponding evidence, if they have knowledge of the alleged payment of money or any kind of gifts in exchange for signatures to support the candidates for free application.

The President of the Republic, Juan Carlos Varela , finished his tour to Russia on Monday, June 18   after participating in the inauguration of the 2018 Soccer World Cup, where he accompanied the Panamanian team in its first match in Sochi .

Teachers at the José Daniel Crespo (JDC) school in Chitré, in the province of Herrera , had their work stopped on Monday, June 18, in response to the lack of response from the education authorities.

The Executive Body established the parameters for the ordinary admission to the administrative career through competition, a process that will take effect from next July 2nd.

They were 47 minutes of prowess for a Panamanian team making its debut in a World Cup, but in the end they failed to contain Belgium that took the three points of Group G with a 3-0 victory, in a match played in the Russian city of Sochi, yesterday.