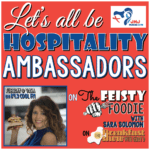 Feisty Foodie, Sara Solomon is with us in the last hour today. Not so much food this morning due to the influx of Pilgrims for the World Youth Day Sara has decided she wants to talk about being hospitable and nice….

The  Public Ministry reported this January 21 that it has assigned prosecutor Ricaurte González , who is in charge of the Second Prosecutor’s Office Against Organized Crime , to be responsible for the case against former President Ricardo Martinelli, for the wiretapping case.

A judge of guarantees of Panama legalized, this Monday, January 21, three proceedings of seizure of data and technological equipment that was executed by the Public Ministry, in the case of a man, of 52 years of age, who was apprehended in the case of the distribution of altered photos of the Attorney General of the Nation, Kenya Porcell .

The  Institute of National Aqueducts and Sewers (Idaan) regional of Coclé, reported that the water treatment plant of Capellanía, of the district of Natá, is out of operation.

The president of the country,  Juan Carlos Carlos Varela , inaugurated on Monday, January 21, the National Security and Emergency Operations Center C5-Panama, located at the headquarters of the National Police in Ancon.

As of this Monday, January 21, the Cinta Costera is closed, for the celebration of World Youth Day.

According to calculations made by the Center for Economic Studies of the Chamber of Commerce, Industries and Agriculture of Panama (Cciap) , the national economy lost “about 1.3 million dollars per hour when it was without electricity.”

A series of unusual celestial circumstances coincided on Sunday night to eclipse the Moon that then reappeared dressed in a faint red in a total eclipse that captivated observers in the Americas, Europe and Africa.