Tuesday 27th June 2017. Piano workshop and eating on a budget 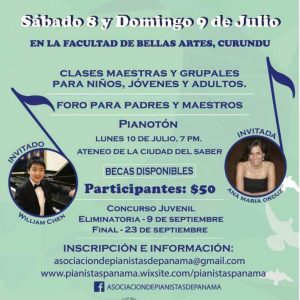 In the second hour we have Margarita Troetsch with David Garcia and his mum Claudia. The topic is the upcoming Piano Workshop and Pianothon beginning of July.Margarita who is an accomplished pianist together with her husband started the workshop 5 years ago. David who is autistic won a gold medal for his playing when he was just seven years of age. click on the pic above to see all the relevant information.

Lastly healthy eating on a budget with Yoly. How to make the most of your money by buying bulk and freezing among other great ideas. Check out Yoly on TV this week cooking ….. on the Cable Onda Sports channel, where else!

During the last half of 2010, the law firm Rosas & Rosas, which includes partner Jorge Alberto Rosas, received more than $2 million from a company related to the construction company Norberto Odebrecht, which has prompted an investigation from the Public Prosecutor’s Office.

Yesterday, Dominican Alcibiades Méndez, pleaded guilty for the crimes of homicide and kidnapping to the detriment of five young people of Chinese descent from La Chorrera, while the other people involved pleaded not guilty.

A million-dollar advance granted by the Government of Ricardo Martinelli for the expansion and rehabilitation of the Arraiján-La Chorrera highway was used for the purchase of Editora Panamá América S.A. (EPASA), revealed the Attorney General, Kenia Porcell.

Cleaning work for a fuel spill near Taboga Island concluded Sunday afternoon, according to the Panama Maritime Authority (AMP).

The Board of Directors of the Social Security Fund approved $15 million to deal with the surgical delays within the social security institution, confirmed Guillermo Puga, president of this body.

During the first year of operation of the expanded Canal, 1,535 neopanamax ships used the new locks.