Second hour of this mornings program we are joined by Karla Quintero to talk to us about “Buenos Aires para Panamá”. A project showing Panamanian films in Buenas Aires Agrentina. This is now the fourth year of the event and will comprise of five days of showcasing the movies made in Panama.

There is a crowd funding petition which is currently ongoing to raid $4500 to assist in the costs. Check it out here. 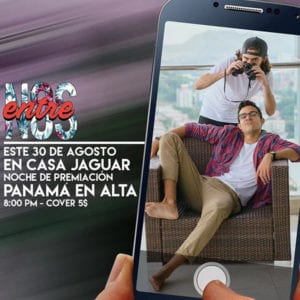 In the last hour it is all about photos taken on cellphones, a competition. Jesus Sierraalta launched this year the competition “Panama Enalta” giving the opportunity to submit your photos taken on your cellphone of Panama. Categories included, portrait, documentary and scenic. The results are go be given out tomorrow, don’t miss it. (Click the pic).

The Fifteenth Criminal Court denied a bail for release on behalf of Daniel Ochy Diez, legal representative of Transcaribe Trading (TCT), who is being held in custody as part of the investigation of the contract awarded for the rehabilitation and widening of the Arraiján-La Chorrera highway.

As her lawyer Kevin Moncada Luna had pointed out, at 8:30 a.m. yesterday the former employee of Financial Pacific, Mayte Pellegrini arrived at the Avesa building, headquarters of the Public Ministry, for interrogation in the case known as “New Business” related to the purchase of Editora Panamá América (EPASA) during the administration of former President Ricardo Martinelli (2009-2014).

Odebrecht, the construction company that created the largest corruption network on the continent, will

remain active in Panama until at least the middle of 2019, considering the projects awarded in the administration of Ricardo Martinelli and Juan Carlos Varela.

A new sanctions enforcement system will be implemented in Panama and has been called “photo fines”, which also seeks to streamline vehicular traffic.

The National Council of Private Enterprise (Conep) proposed incorporating a methodology to calculate the cadastral value of the properties in draft law 509, which proposes a reform of the property tax.

Children with cancer and palliative care will be the protagonists in the red carpet during the premiere of “Lo Que De Verdad Importa” or “What Really Matters”, a film that will destine its entire box office to the Foundation Friends of Children with Leukemia and Cancer (Fanlyc).