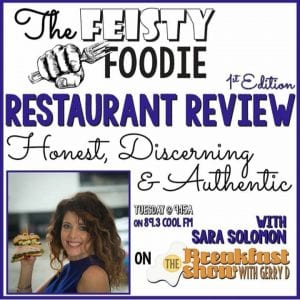 Last hour on a Tuesday is Feisty Foodie day. Sara Solomon joins me to talk about a Greek restaurant that she recently visited. We also talk about tipping, always a contentious subject. Should it be the norm to tip?

I play music apparently traveling around, Amarillo, San Jose and a listener wanted to go to Tipperary!

The Sixth Anti-Corruption Prosecutor requested the Tribunal Electoral (TE) to lift the criminal electoral protection from the former first lady and candidate for deputy to the Central American Parliament (Parlacen), Marta Linares de Martinelli, who is mentioned in the investigation for the alleged payment of bribes by government contractors to past government officials, better known as the Blue Apple case .

“Each state body is responsible for its actions and the 71 deputies are those who have to explain these resources,” said  President Juan Carlos Varela when asked about the handling of the returns in the National Assembly .

The President of the Republic, Juan Carlos Varela , confirmed on Monday April 29 that he will call extraordinary sessions of the National Assembly.

The spokespersons of the  Metro of Panama announced on Monday, April 29, the adjustments within the system of collection of this service.

In the General Electoral Plan of the Tribunal Electoral there are still two important dates to be fulfilled, the first is related to propaganda and the second to the ley seca.

The purification plant Federico Guardia Conte, of Chilibre, began to work gradually to restore the supply of drinking water in the capital city, the Institute of Aqueducts and Sewerage National (Idaan) reported yesterday afternoon.