A big thank you to our guests this morning. We start in the second hour with David Tunon and Andres De La Guardia from MMG Bank

. We cover many topics not just about banking in Panama but general frustrations with opening accounts and working with banks. Why are we the customers so answerable to banks as to how we conduct our financial business? David and Andres put up a brave fight! 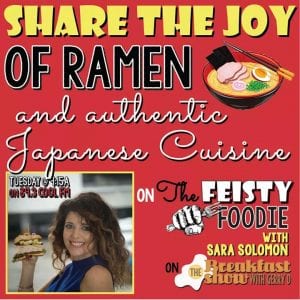 In the last hour, being Tuesday it is food with Sara Solomon from Solomon’s Deli. Today Sara has a special Guest Luis from Yakatori Panama and we talk about Ramen which is a

traditional Japanese dish (although originating from China) which takes many hours of preparation.

The judge of guarantees of Panama Justo Vargas denied the bail of release to the president Ricardo Martinelli.

The deputy Adolfo Beby Valderrama, candidate for mayor of Panama for the official Panameñista Party, announced on Monday February 4 that the lawyer and social communicator Edna Jaramillo is their candidate for vice-mayor, for the general election on May 5 next.

Laurentino Nito Cortizo , presidential candidate of the alliance between the Democratic Revolutionary Party and the Nationalist Republican Liberal Movement (Molirena), made the appointment of José Gabriel Carrizo Jaén official, as his candidate for vice president of the Republic. He did it before the Electoral Tribunal, the entity in charge of the elections on May 5 next.

Liberty Latin America Ltd , owner of 49% of the shares of Cable & Wireless , announced on Monday, February 4, its plans to establish its new operations center in Panama City, which will become the heart of the operations of the company.

The agricultural sector is preparing to face the arrival of the El Niño phenomenon.

At the ACP they are also feeling the effects of the lack of rain. For example, until last Friday the level of Gatun Lake was 26 meters (0.67 below the average level) and in Lake Alajuela it was 73.97 meters (2.20 below the average).