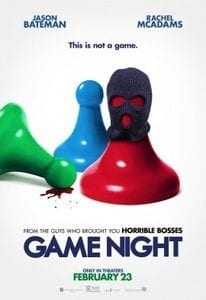 Movie Review is first up this morning. Andres has been to see Game Night a comedy Directed by John Francis Daley and Johnathan Goldstein. Staring Jason Bateman and Rachel McAdams. Is it worth a watch? Check out the review. Also we take a look at “What Happened to Monday” this one I would recommend a watch on Netflix.

Wednesday is not complete without checking out what is happening in the Great White North. Michael gets us up to speed with this weeks Canada Report.

Lastly today my guest is Bernz Diaz, Panamanian composer/musician currently living in Bangkok. Born with a hearing deficiency Bernz fell in love with music, working with musicians in Thailand he has produced some great music (under the name Buhonero Clandestino) which are also complimented with artistic works. Have a listen to the program as we talk about his story, listen to his music and he has a concert on the 28th of March at the Teatro El Angel. Tune in tomorrow morning for some free tickets.

The looting that took place in the city of Colón during Tuesday afternoon is common crime and is not related to the protests organized by the Committee for the Saving of Colon.

Yesterday morning Tuesday, March 13, the kidnapping of a group of people who were playing golf at the Golf Club of Panama, in Cerro Viento, was reported.

Because it is a totally illegal action, the Panameñista Party’s bench does not recognize what has taken place regarding the re-formation of the Credentials Committee of the National Assembly.

The Fifth Criminal Court, in charge of Enrique Paniza Morales, received Monday afternoon March 12, a letter from the Anti-Corruption Discharge Prosecutor, requesting the reopening of the summary for the irregular use of public funds through the boards community .

At noon on Tuesday, March 13, the Council of Panama approved with 19 votes in favor of the indefinite suspension of the PH Buona Vista project in the corregimiento of San Francisco.

On Saturday, March 10, the National Prosecutor,  Kenya Porcell  reported that at least 18 women had been rescued in the operation called “Darién” against trafficking in persons in the districts of Chepigana and Pinogana.

Giving greater security to the residents of the San Miguelito district is what is projected, based on the upcoming installation of video surveillance cameras at specific points in this sector of the province of Panama.