Wednesday 14th November 2018. Movie Review and you, me and the music.

This weeks movie review with Andres Clemente, The Girl in the Spider’s Web. Young computer hacker Lisbeth Salander and journalist Mikael Blomkvist find themselves caught in a web of spies, cyber criminals and corrupt government officials. 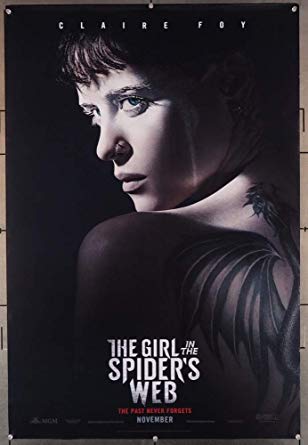 “An interesting mis-fire of a film; one that feels filtered or watered down. The movie gives us brand new sides to great actors, some fun action sequences, picturesque shots, but prefers to highlight that, before a good mystery story and proper character development”

In the Supreme Court of Justice circulates a draft decision, prepared by the rapporteur Oydén Ortega, who would decline the jurisdiction of the trial of former President  Ricardo Martinelli, given his alleged resignation as a deputy of  the Central American Parliament (Parlacen) .

The  Panamanian Association of Business Executives (Apede) requested on Tuesday, , the President of the Republic, Juan Carlos Varela, to partially veto the law that dictates the  general budget of the State for the fiscal period 2019.

José Carlos Pombar Cameán, who was a fugitive from the Spanish justice system for 14 years, was captured on Monday, November 12, when he tried to enter Panama with false documents.

The Judicial Body reported that the preliminary hearing of the case known as “call center” was suspended due to the resignation of one of the defense attorneys.

The administration  of the Tocumen airport had to clarify the additional works it requested from the Brazilian company Odebrecht and that are contained in the four addendum signed to the contract for the construction of the new passenger terminal.

The  Camino de Cruces National Park, in the village of Ancón, has more than 4 thousand hectares of primary forests, which over time have been disappearing to make way for construction projects not only private, but also state.

The National Bank of Panama will not send to the banking entities that operate in the country banknotes of one dollar denomination as of November 16.