It is the time of the week that we take a look at what is on offer at the movies. Andres’ review this week is “Valerian and the City of a thousand planets” it was a 6/10 score, take a listen and find out whether it is worth watching. 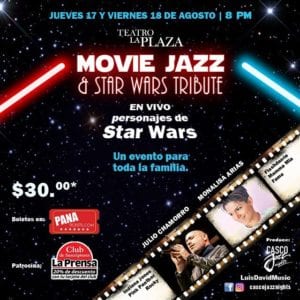 Luis David Bonilla makes a return visit to the show. Sticking with the movies tomorrow and Friday is Movie themed and Star Wars Jazz night, it will be at the La Plaza theatre in Obarrio.

No Wednesday is complete without the Canada Report from Michael… How about a carrot finding your lost wedding ring?

The defense of former magistrate Alejandro Moncada Luna desisted on Monday from obtaining house arrest. The new strategy could be to wait until February next year, when two-thirds of the sentence has been served, to opt for parole.

The Third Civil Circuit Court of Panama ordered to “revoke” the order contained in the construction permit approved by the Panama City Hall for the construction of the Sea Point real estate project in Paitilla, San Francisco.

The Frente Amplio para la Democracia (FAD) movement announced yesterday a call for a march next Thursday to protest against Vice President Mike Pence’s visit to Panama, “because his country continues to sow hatred in Latin America.”

The Panamanian Association of Business Executives (Apede) asked the National Assembly for a “comprehensive and inclusive” debate on the bill that includes reductions in property tax.

One dead and three wounded was the result of a multiple vehicular collision on the Centenario road, at Burunga, towards Panama Oeste.

Number portability in Panama expects to exceed one million customers by the end of 2017, according to an estimate of the National Authority of Public Services (ASEP).

An extension of the contract between First Transit and Transporte Masivo de Panamá, SA, was approved Monday by the Cabinet Council in its last session. This seeks to improve the mobility of users of the mass transit system in the districts of Panama and San Miguelito

A large number of Panamanians enjoyed the parade for the 498-year anniversary of the foundation of Panama City.