Movie review time for this week. Andre Clemente is with us and this week he takes a look at “Stuber”. 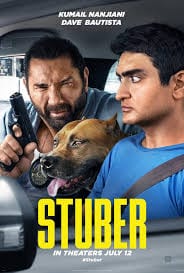 is Uber driver into an unexpected night of adventur.”

“Buddy cop action comedy’s are tough to pull off; they cant be too serious but they can’t be to dumb; sadly Stuber falls in the too dumb category. The film has strong leads, and most of their interactions are funny, but when a third character gets introduced the movie looses its mojo. Perhaps an ok movie when you’re looking too turn off your brain, for a couple of hours; just wait for it to be free on cable.”

The Cabinet Council authorized on Tuesday afternoon, the Minister of the Presidency, José Gabriel Carrizo, to present before the plenary of the National Assembly the document of the constitutional reforms agreed by the members of the Council of the National Agreement for Development.

The former mayor of Panama and former presidential candidate for the Democratic Revolutionary Party, Juan Carlos Navarro , said he recognized during the session of this Tuesday, July 16 of the trial of former President  Ricardo Martinelli for the case of the wiretapping and acquiring emails that were illegally intercepted .

A mother and her two underage daughters became the new victims of the criminals who in recent weeks have been doing their rounds in the district of Penonomé, where they have already committed three armed robberies.

In Brisas de Golf, district of San Miguelito, the country’s first digital free zone will be installed, which will require an investment of 38.9 million dollars, according to the projections made by the government of  Laurentino Cortizo.

The Panamanian doctor and writer Rosa María Britton died yesterday July 16. She was 82 years old. Dr Britton was also known for her fight for human rights.