Wednesday 17th May 2017. The Movie Review and Black Ethnicity.

Time for this weeks look at the movies. Andres Clemente gives us a rundown on the new Alien film “Alien Covenant.” Scoring a 6.5 out of 10 take a listen to Andres full review on this morning program. 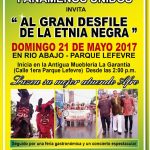 In the last hour Veronica Thorpe comes into the studio as we take a look at the events of Black Ethnicity month and also the event taking place on Sunday being put on by Afrodescendientes Panameños Unidos. Click on the flyer for more info.

Prosecutor Kenia Porcell revealed on Monday that $12.8 million had been located in accounts in Andorra linked to the investigation of bribes paid by Odebrecht to Panama officials.

Gonzalo Moncada Luna presented yesterday afternoon, before the Supreme Court of Justice (CSJ), a criminal complaint against deputies Rony Araúz and Crescencia Prado, for alleged violations of the duties of public officials.

The government is evaluating the criminalization of tax evasion, a recommendation from agencies such as the International Monetary Fund (IMF), the Financial Action Task Force and the United Nations.

Tomorrow will take place the second verification and control hearing in order to monitor the temporary house and hospital arrest against the former dictator Manuel Antonio Noriega.

A group of people protested yesterday against the eviction of squatters being carried out in Cerro Galera, Arraiján.

Thirty deaths have been reported in the city of Colón, marked by violence between criminal gangs that are driven by quarrels, territory disputes and rampant raids.

A 24-year-old man was apprehended by the Metropolitan Prosecutor’s Office for sending threatening messages via Twitter to First Lady Lorena Castillo de Varela.

The laboratory created in the City of Knowledge by the Ecostudio Association, became last weekend the first Panamanian digital manufacturing workshop (fablab), approved by the Massachusetts Institute of Technology (MIT).