Positives
World Building
Breaking the classic Star Wars storytelling pattern.
Kilo Ren is an amazing character
Kilo Ren and Rey’s connection
Some comedic bits that give the movie some air over the heavy drama
Great performance by the entire cast.
Fun to see Luke Skywalker back
The new cast continues to carry the mantle 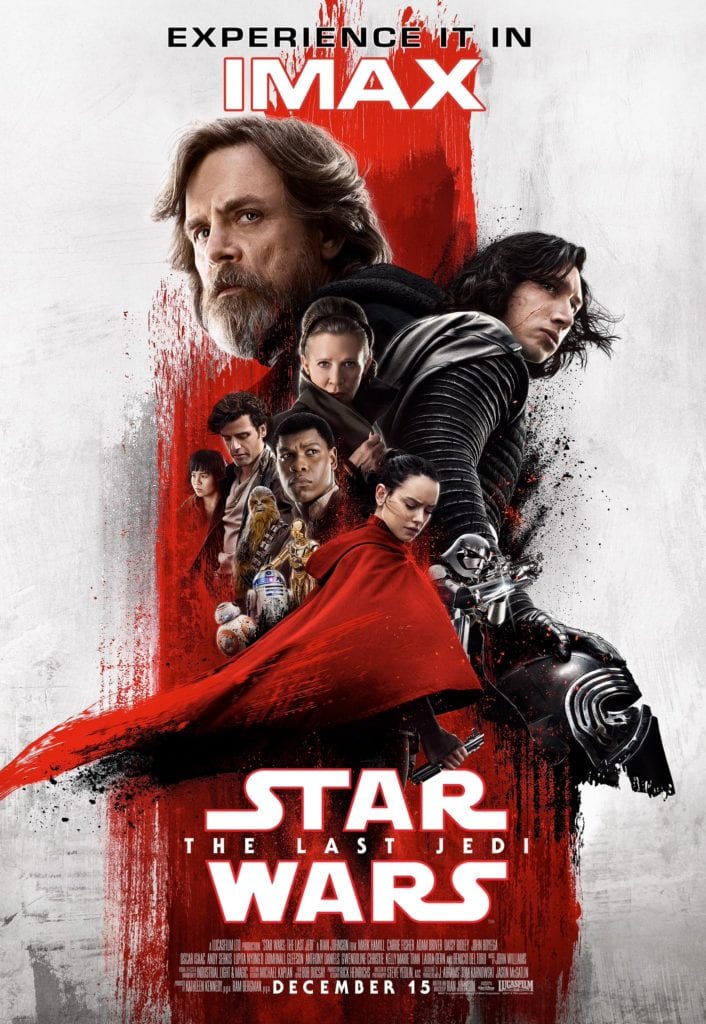 extremely well.
Amazing visuals
Great new alien creatures that make you realize you’re in a Star Wars world, but dont distract from the plot.
Movie takes it time to develop the characters introduced in Force Awakens
Added character of Rose played beautifully by Kelly Marie Tran was a welcomed surprise.
Some great long awaited showdowns, standout has to be in Supreme Leader Snoke’s chambers.
Negatives
Bittersweet to watch Carrie Fisher’s last turn as Princess Leia.
Rey learns about the force extremely fast
Some jokes did not land.
Benicio del Toro’s character, even though it was interesting, did not enjoy the choices the actor made.
The light saber dueling is less choreographed.
Would’ve liked more Droid screen time.
Character’s should not survive thousand of deaths.
A lackluster conclusion to a Kilo – Rey confrontation
Final Comments
Great to have Star Wars back in movie theaters. Rian Johnson does a great job expanding the universe and develop the new characters. Dont miss this movie, and highly recommend watching it on IMAX.

The penalty agreement between the Anti-Corruption Public Prosecutor’s Office and the former director of the debunked National Assistance Program (PAN), Rafael Guardia Jaén, has exempted the criminal charges against the former official in 15 investigations that are being conducted by the judiciary.

The president of the National Assembly, deputy Yanibel Ábrego, authorized for today the extraordinary sessions in order to ratify the appointments of Zuleyka Moore and Ana Lucrecia Tovar de Zarak as new magistrates of the Supreme Court of Justice.

The National Executive Council (CEN) and the deputies of the Democratic Revolutionary Party (PRD) announced that they will reject the appointments of Zuleyka Moore and Ana Lucrecia Tovar de Zarak, as magistrates of the Supreme Court of Justice (CSJ).

The main suspect in the murder of the 6-year-old girl that disappeared in La Doradilla sector, La Chorrera, was captured by the National Police in the San Antonio neighborhood and placed under the orders of a judge of Guarantees.

From January to mid-December 2017, the statistics of the National Migration Service reflect the verification of 2,058 foreigners and the retention of 1,568 citizens of different nationalities.

Plaza Santa Ana was reopened on Monday, December 18, commemorating the parties on the outskirts, which in the past the town would celebrate in the vicinity of this historic area.

Under the leadership of coach Hernán Darío Gómez, the Panama national football team has won another award.