Movie review time with Andreas. Personally I am not a great lover of remakes, so it will be interesting to hear the comments from Andreas on a remake

of the Angelina Jollie’s movie Tomb Raider…. Good or Bad?

No Wednesday is complete without our trip to the Great White North… It is the Canada Report with Michael!

In the last hour of the program today we go French. It is a pleasure to have the French Ambassador to Panama Brice Roquefeuile and from Alliance Francais Sylvi 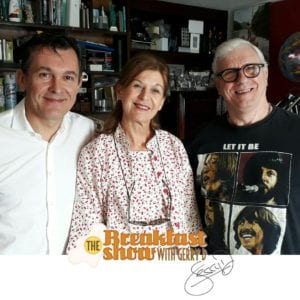 a Benassy. All things Francofonia, Gastronomy week and all the events celebrated this month with Alliance Francais, which by the was has been active in Panama since 1951.

The first approaches between Panama and China to establish diplomatic relations occurred in January 2015, when the forum of the Cooperation Plan for Latin American and Caribbean States (Celac) was held in Beijing, China.

The Second Criminal Chamber of the Supreme Court of Justice (CSJ) shall define the conflict of jurisdiction that has arisen within the investigations into to irregularities in the management of funds in the communal boards at the national level.

A group of residents of the corregimiento of San Francisco presented on Tuesday to  the Municipal Council of Panama a demand for the suspension of the construction of PH The Towers.

The general director of Income, Publio Cortés , informed of his irrevocable resignation from the position, which will be effective as of May 1, 2018.

The company  Minera Panama and the Single Union of Workers of the Construction and Similar Industry (Suntracs) signed on the morning of this Tuesday, March 20, 2018, an agreement that will allow the reactivation of the Cobre Panama project.