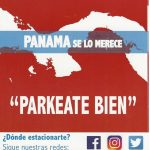 There is nothing more annoying that people that have lack of respect when it comes to parking and it is becoming more of a problem. Leading up to a crackdown by the Transito department “Bad Parking” tickets are being passed out by them and by volunteers (Oh yes I have been given a batch!). Alberto Rodriquez Cespedez joins me this morning to tell us all about it…. I a couple of weeks it will be sticky tickets by the authorities and towing away.

Wednesday and it is that time of the week to check out the happenings in the Great White North with Michael.

The Superintendency of Banks of Panama has fined various financial institutions a total of $3.2 million this year.

It seems that the country will have to wait until January 2, 2017 to meet the new judge of the Electoral Tribunal (TE), just like the ratification of the directors of the Agricultural Marketing Institute (IMA) and National Institute of Vocational Training for Human Development (Inadeh).

Tribunal Electoral Judge Erasmo Pinilla has expressed concern over the process of selecting his replacement for when his term expires at the end of the year.

The splendor the Amador Causeway had a decade ago has been taken away. Today the tourist attraction is a ghost area.

The transport authority ATTT has announced it will not charge people the 10 percent surcharge for failing to pay a fine on time during November and December.

In the coming years, in Panama, just as in at least three Caribbean countries (Barbados, Trinidad and Tobago, and Granada), cassava could be considered as the key to curb food imports of wheat flour and reduce production cost of byproducts that are generated from it.

By Decree No. 21 of October 2016, the Mayor of Panama prohibits the sale and consumption of alcoholic beverages on routes established for patriotic parades, on November 3 and 4. It also suspended the sale in commercial establishments located on both routes.

For the first time in Panama and thanks to technology, the public can pretend to be an artist and see through the eyes of the author art pieces that are transformed into the ‘other’ reality, the virtual one.