Wednesday 30th May 2018. Solo a Star Wars movie and Hill Quest for gamers

It is that time of the week for us to take a look at what is on at the movies. This week Andres review (slaughters may be a better word) Solo, a Star Wars Movie. You may want to wait until it comes on your TV… For Free. ” The very big issues behind the scenes is clearly visible in the fin

ish product. Ron Howard makes another safe choice, which gives us an Ok story of probably the most famous character in movie history. In short, Im very disappointing as a fan, and indifferent as a critic.” 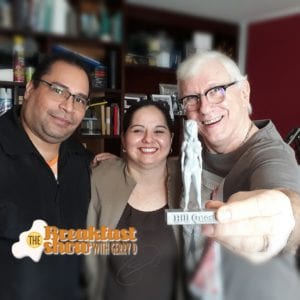 In the last hour Rita Rios Arce and Aldo Alain from Multitool Studios are with us to talk about their game “Hill Quest” that was launched in January on Steam for computers and is soon to be found on Xbox and Playstation platforms.

The  Federal Court of Appeals of the 11th American circuit , based in  Atlanta , accepted the request of former President  Ricardo Martinelli  to desist from the appeals filed against his extradition to Panama.

Luis Carlos Pimentel García was appointed on Tuesday, May 29 by  President Juan Carlos Varela as a member of the Actuarial Technical Board of the Social Security Fund (CSS) .

The National Authority of Public Services (ASEP)  affirmed this Tuesday, May 29, that it will exclude from the discussion of the adjustments to the Tariff Regime the issue of charges to customers with self-consumption through solar panels or other means of renewable generation.

Those affected by the massive poisoning with diethylene glycol, closed the Transístmica road at the Arnulfo Arias Madrid Hospital Complex, and the bridge over the La Villa river, in Los Santos.

The albrook hall of Albrook Mall, was the stage for the National Institute of Culture (INAC), through the National School of Dance, to celebrate the month of the black ethnic group, with various demonstrations.