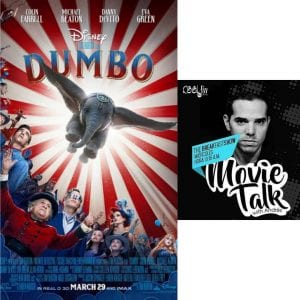 Andres comes in with a pretty scathing review of the newly released movie ‘Dumbo’. “One of the most creative directors of our time fails to capture the magic of a classic Disney film; instead, he uses his great eye for movie visuals and a regrettable script, to produce what I can only describe as a mediocre telling of a complicated tale. With performances and storytelling comparable to a Made-for-TV Hallmark movie, this is a huge miss for Disney and Director Tim Burton.”

In the last hour of today’s program a very talented young man Sebastian Coloma. Sebastian studied in New York which is where he has settled, he is a guitarist, singer, composer and a producer. He talks about his career the music industry and his new single Encuentrame en el Mar.

The government of President Juan Carlos Varela, which has been marked by his political adversaries as an administration that has slowed down the economy, came out on the morning of this Tuesday, April 2 to deny the candidates for the Presidency of the Republic who have repeatedly manifested that the current administration owes more than $1 billion to state suppliers.

Yesterday April 2, Four consortiums submitted their proposals to take on the contract for the design and construction of the third line of the Panama Metro, which will connect Albrook, in the capital, with Ciudad del Futuro, in Arraiján.

The Anti-Corruption Special Prosecutor’s Office requested an extension of the term to continue the investigation for the bribes paid by the construction company  Odebrecht in Panama.

A judge of guarantees legalized this Tuesday, the capture of information from the Twitter account of  Daniel Marury Lou , who was denounced by former President  Ricardo Martinelli for the alleged commission of the crimes of libel and slander.

The use of judicial processes against journalists and the media as a form of harassment, in order to generate self-censorship, continues to be used in Panama by different groups, said  the report presented by the Panamanian delegation to the half-year meeting. of the Inter-American Press Association (SIP)

The basins of the Tonosí and La Villa rivers, in the region of Azuero, are those that register more cases of erosion on their banks with the affectation of roads and the storage of water for the purification plants.